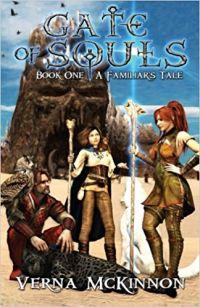 Familiars. Magical animal companions of sorcerers. Keepers of spells and secrets. Most important, devoted friends for life. When one such familiar, Mellypip, bonds with the young sorceress Runa, he shares in the wonders of magic. Together, Mellypip and Runa train under the tutelage of Runa's grandfather, Cathal, and his cantankerous mountain owl familiar, Belwyn. But secrets and spells do not make for good sorcery. Old friends begin to vanish even as enemies from Cathal's past return, threatening to reveal the truth of Runa's parents; a truth from which Cathal must protect his granddaughter at any cost. When Cathal is kidnapped, Runa and Mellypip rush against time to save their family and friends from dark sorcery that will not only destroy them, but shatter the Gate of Souls and release demonic creatures of The Otherworld unto the mortal realms.

Rating
5.0  (1)
Already have an account? Log in now or Create an account
A whimsical adventure of pure fun
September 11, 2017
Rating
5.0
I thoroughly enjoyed this book. It reminded me of several others of the genre, all of them good. The character interaction is reminiscent of Eddings' Belgariad, but clearly unique to Ms. McKinnon's work. The plot is solid and drew me in quickly, and the marvelous detail of the world along with the pure fun of the interplay between familiars and humans kept me reading.

Perhaps best of all, there is no attempt to have this book take itself too seriously. Rather, it invites the reader to enjoy a fun romp with the main character, Runa, who is facing new challenges through inexperienced eyes.

We're seeing the tip of the ice burg with this novel; the author clearly has a well developed universe in which to set the story and there's no awkwardness in the dialogue. The entire experience is like slipping into a favorite pair of shoes--it's an immediately comfortable fit in which you're a natural, expected part.

This is a quick, fun read that will leave you asking when the second book is coming out.