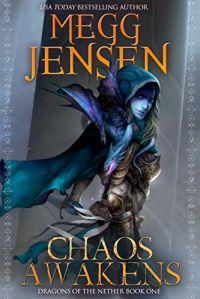 For hundreds of years, the orcs and humans of Doros have shared an uneasy peace. It shatters in an instant with the botched assassination of a human priest in the orc capital. Hell bent on revenge, the humans take up arms as the orc monarchy crumbles from outside interference.

Now Tace, the unlucky assassin, is on the run. It's soon clear, however, that her mistake hasn't only precipitated a war. It's unleashed ancient powers, the stuff of legends and fireside tales—and not the cozy kind.

Tace has always worked solo, but to save Doros, she'll need to assemble the unlikeliest allies. Together, they'll unravel the mysteries of the orcs' cult of death, and in the process, Tace will come to question everything she's ever believed. Only one thing is certain: a great destiny awaits her—if she can live long enough to meet it.

Chaos Awakens is an epic fantasy spanning multiple continents. Orcs, humans, elves, fauns, dwarves, and dragons fight for dominance in a new fantasy world sure to spark the imagination of fans of George R. R. Martin’s Song of Fire and Ice series and Robert Jordan’s Wheel of Time series. Written by USA Today bestselling author Megg Jensen, Chaos Awakens is the first novel in the new series Dragons of the Nether.

Megg Jensen does for orcs what R.A. Salvatore did for dark elves
May 26, 2017
Rating
5.0
Chaos Awakens by Megg Jensen is a great epic fantasy novel that I very much enjoyed. There are plenty of interesting characters with the main characters being a female orc assassin, a human male priest, and a female orc princess. They form an unusual team as humans and orcs head towards a war at a time they need to team-up against a godly enemy. There are plenty of intimate moments and character development mixed in with action and epic threats to the world.
This book is everything that a good fantasy novel should be and reminded me of the great dark elf stories about Drizzt Do'urden by R.A. Salvatore that ended up becoming a massive 23 books series due to the popularity of Drizzt, his companions, and their epic adventures. I can't guarantee that this series will be anywhere near as popular but I recommend it with five out of five stars for any fantasy genre fans.